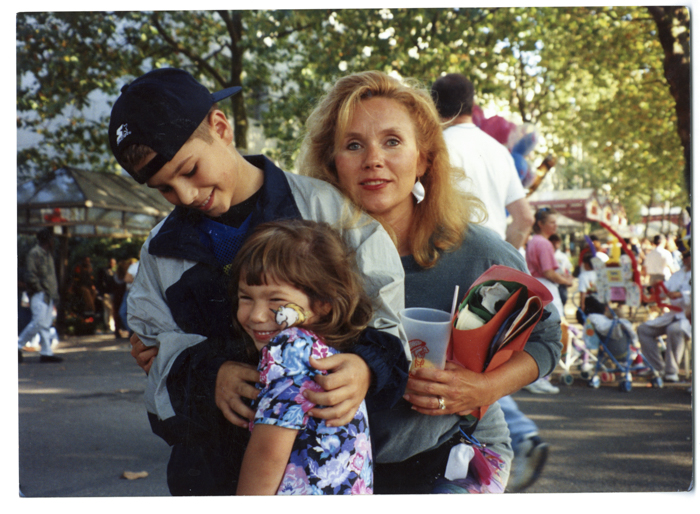 You Have Nothing To Worry About At SCAD Museum Of Art

From January 30th to April 29th, the Savannah College of Art and Design’s Museum of Modern Art will showcase the photo collection You Have Nothing to Worry About, from photographer and SCAD alumna Melissa Spitz. The collection exhibits Spitz’ mother through battles with mental illness and substance abuse during an 8-year period.

Melissa Spitz is from St. Louis, Missouri, and currently resides in Brooklyn, New York. She earned an M.F.A. in photography from SCAD and a B.F.A. from the University of Missouri — Columbia. Spitz’s work has been featured by the Aperture Foundation, Time magazine, VICE, The Huffington Post and other publications. She was recently named Time’s Instagram Photographer of the Year for 2017.  You Have Nothing to Worry About is the third project from Spitz, following up to her projects Tributary, chronicling police brutality and injustice against African American citizens, and Where Birds Go to Die, following the steady decline of her grandfather in a treatment facility.

Through the capture of minute instances of pain, love, turmoil, chaos, and joy, Spitz creates a space to explore the human spirit. Hung salon style on plain white walls under pale pink lights, the photos circle the room to form a narrative chronicling numerous moments in the life of Deborah Spitz. 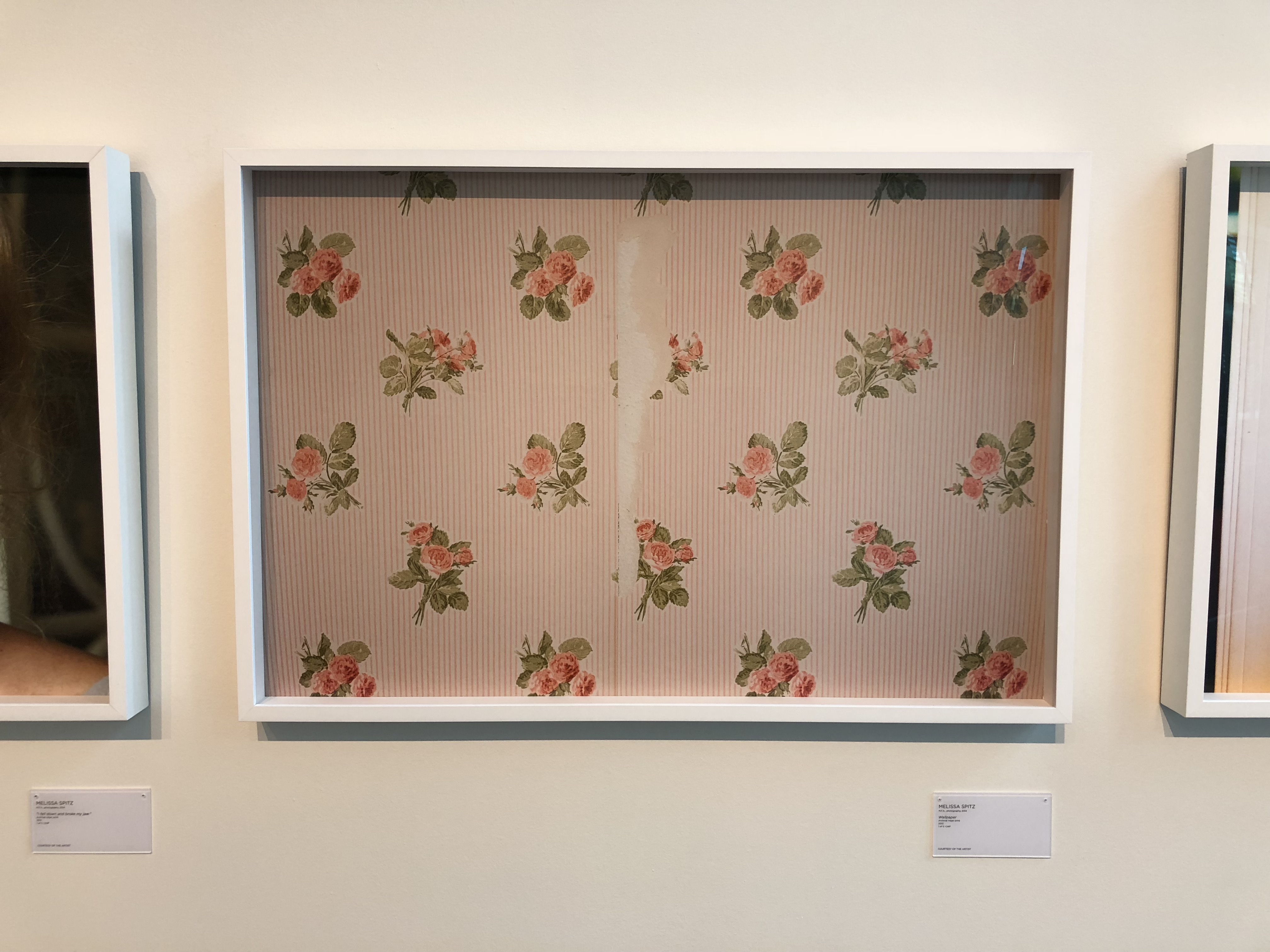 Torn wallpaper, spackled holes in the wall, pills, and her face bruised, and cut are just a few of the pictures framing the gallery. 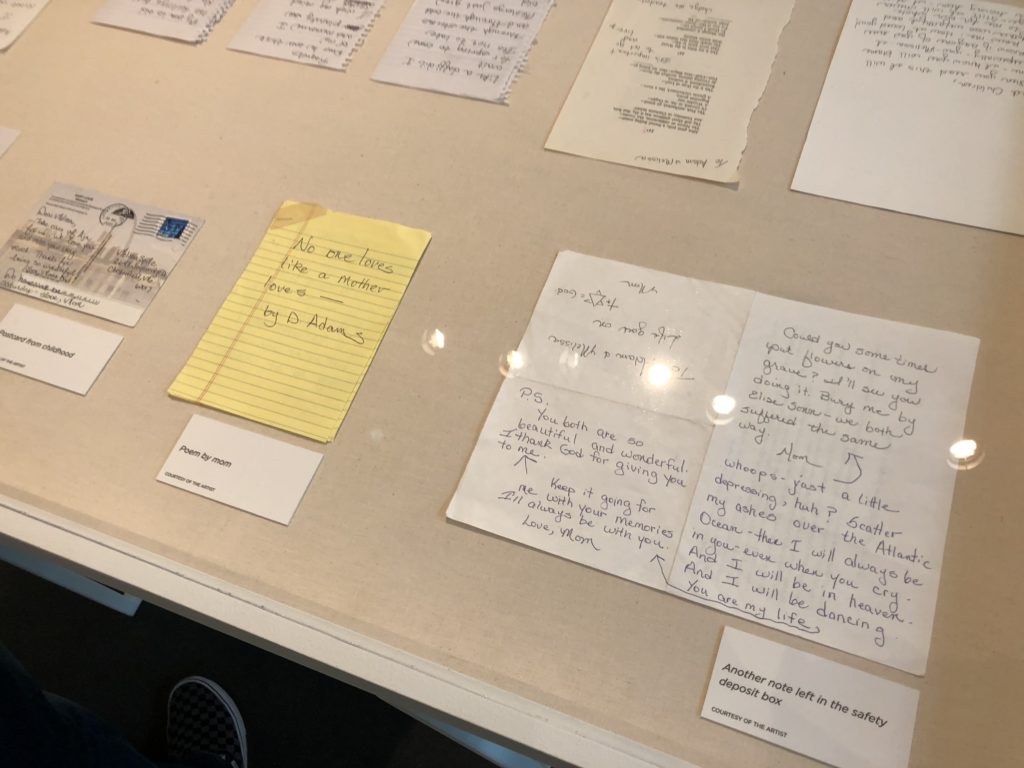 Organized neatly and quietly under glass tables centered between the photos sits private letters, poetry, and other handwritten notes left behind by Deborah.

Walking through the exhibit, I was not prepared for the emotional drain I would find in reading the letters and papers left behind. From sad poems and regretful notes to the suicide note of Deborah herself, each piece struck me harder and heavier than the last. Seeing a picture of her lounging around a pool blissfully takes a different tone when it’s placed next to her waving a gun. Pictures of bruises look worse when they’re next to buckets of pills, and her arms torn up with bruises.

Her scribbled cursive handwriting looping around memories and curling past nightmares, the notes and poems brought tears to my eyes, though I found no comfort in my reflections on the photo frames. I thought about the impermanency of your health, and the fragility of the relationships we maintain in our lives. Melissa Spitz shared the privacy and intimacy of how her mother inhabited the world, and I could not help but leave the exhibit deeply removed and despondent.

Though small in size, the gallery work of Spitz is filled with limitless emotion and depth. Deborah lived a life of abuse and tragedy, suffering at great length in what I could only imagine to be a very taxing life. You Have Nothing to Worry About invites viewers to witness the strength and fragility of the human spirit, and creating a space to think about the cycles of abuse and prison of mental illness.

Viewers will be able to appreciate the collection until April 29th, and you can view the full gallery here.

The Zeal Life- Let Me Wear Your Letterman

Phil Oh Back at It, A Look At My Favorite Fashion Week Street Style Shots