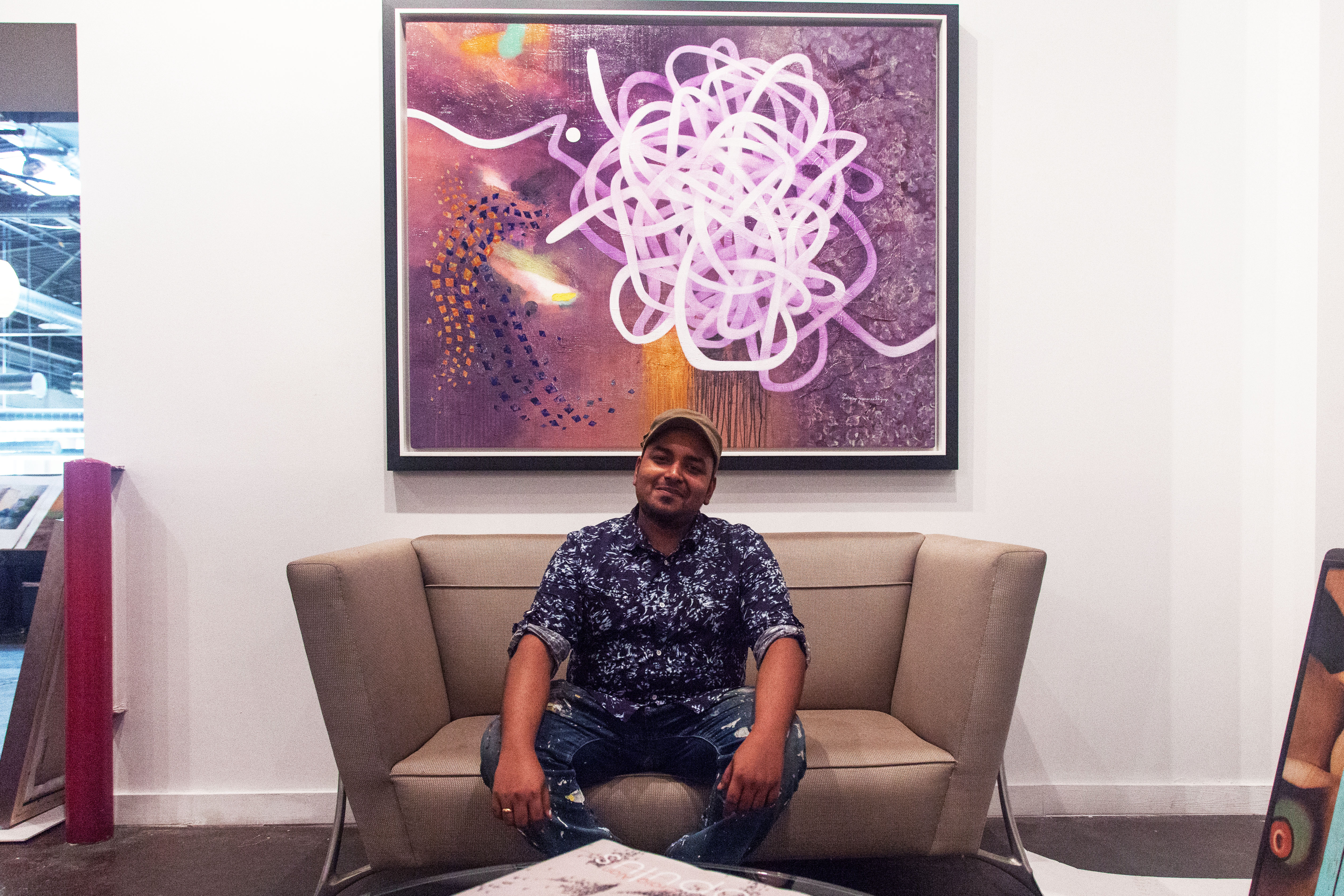 When an artist can pull you into eclectic realities, inciting stories, sounds and exceptional visuals that create individual experiences– both spiritual and sentimental– just by glancing at their work— you have experienced the highest caliber of artistry. Srinjoy’s Gangopadhyay is an artist that moves viewers through this unique journey. He is an international contemporary artist with a focus in painting and installation art. The work he creates is infinite in its execution because the story doesn’t end with just the visual formalities, but his process is just as worthy of recognition as the physicality of the pieces. Two of his most recent series Chiaroscuro and Heal Mappings are great examples of these concepts.

Imagine stepping into a dark mini-series of artwork—surrounded with abstract pieces, evoking feelings of nostalgia, pain, romance and peace. Srinjoy’s collection Chiaroscuro creates this very experience. Chiaroscuro is a breathtaking series of paintings with impeccable depth. The paintings inspired by William J. Turner experiment with the quintessential elements of lightness and darkness, Srinjoy shares “I am a big fan of William J. Turner’s paintings, he is known as the painter of light…I definitely have Turner’s painting noted in my mind, but towards the end [the painting process] it goes toward a different place.”

Alongside the interplay of shade variations, the pieces depict visual echoes, creating a synesthesia effect. The effect is created through the use of thematic gestural handwriting, so not only does it bring visual to sound, but it connects the work to nature through the portrayal of landscape and horizon. What is also imperative to note about the project is Srinjoy’s multitasking technique. He works on 20 pieces of work at a time, starting as one whole composition and ending with individual paintings. The improvised process of controlled chaos as the paint is splattered and thrown onto several canvases, intertwines a theatrical element that is evident upon viewing the final product— overall suggesting a performance series of work.

A combination of tools were used to accomplish the series, including a barbecue brush, his fingertips and graffiti markers. Srinjoy used a range of conventional and unconventional tools to further implement the abstraction in design.

Srinjoy’s mastery does not end with the atmospheric tellings of Chiaroscuro, but continues with the colorful and divine experiences of the Heal Mappings collection. When admiring the series of work, his talent as an artist cannot be ignored. Heal Mappings engages the viewer with beautiful color configurations and stimulating focal points. The entangled mass pulls the viewer into the piece as the eye is forced to trace the white labyrinth– as it meant for the viewer to do so. The maze has a spiritual significance, its purpose as Srinjoy tells it is “a spiritual tool for meditation and prayer inspiring the healing passage to the center of your deepest self and back out into the reality with a heightened consciousness of your identity.” Srinjoy’s ability to combine unworldly significance with elaborate whimsical design, implied texture and clean composition is an attest to his superior artistry.

And while the series is beyond successful, he admits to some challenges during the process, “The exercise of maze making is at times confusing to myself as I am also trying to trace a way out of the puzzle – so it is like building up a puzzle and then trying to solve it- so the process is rigorous.” Understanding the highs and lows of an alluring project, makes the work that much more relative and only emphasizes the significance of Srinjoy’s processes of the pieces.

The Heal Mappings series is done in mixed media. Layers are the main technique used in each piece. Srinjoy uses Burlap, Mylar and detailed brush strokes and wash to create a fine final product. The motive here is a “planned chaos” structure.

Through retelling of stories and attempts to challenge the viewer’s perception of things– I intend to inform, provoke and engage.”

Srinjoy’s work is diverse in its message and ability to provoke thought and invite the viewer to create his/her own story as they navigate through each piece. His work is a melting pot of experience—removing all limitations from creative processes. When asked his mission and purpose as an artist, Srinjoy states, “I make these utopian models in an auto-ethnographic process to respond to my personal experiences and also the world around me. Through the retelling of stories and attempts to challenge the viewer’s perception of things – I intend to inform, provoke and engage.” Chiaroscuro and Heal Mappings are spot on with these intentional viewer interactions. There are not too many artists that can entangle the profound taboo of spirituality, visual sound effects, personal narrative and cultural elements into unified series, but Srinjoy accomplishes this without effort. The result is paintings that can be analyzed a 100 times and each time a different message and feeling can be evoked. Simply put–Srinjoy’s work is revolutionary. He explores and experiments—breaking contemporary boundaries without fear and because of this he is a leader in the creative field– adding substance, integrity and challenging the status quo of contemporary visual art.

He received his Masters of Fine Arts from the Savannah College of Art & Design (SCAD), Atlanta, USA in 2015. While at SCAD, Srinjoy was awarded the prestigious juried residency at the Elizabeth Foundation of Arts in New York. In 2014, Srinjoy was selected as Curatorial Assistant for the ‘TIME::CODE’ exhibition at WhiteBox Art Center in New York, curated by Raul Zamudio and Juan Puntes and featuring such internationally renowned artists as Ai Wei Wei. He has written and published articles for Art Radar Asia and Artehelka, Srinjoy was part of juried exhibitions Lalitkala Academy, AIFACS and received Best Oil Painting award from Camel Art Foundation.in India. After joining the Deljou Art Group he was named lead artist in 2016 and won the DAG Emerging Artist Award.

For more of Srinjoy and to view all of the Chiaroscuro and Heal Mappings series visit  Deljouartgroup.com.

Atlanta Contemporary Artist Lynx Nguyen, Enlightens Us On The True Purpose Behind Being An Artist

Is Instagram Breaking the Self-Esteem of Our Generation’s Woman?