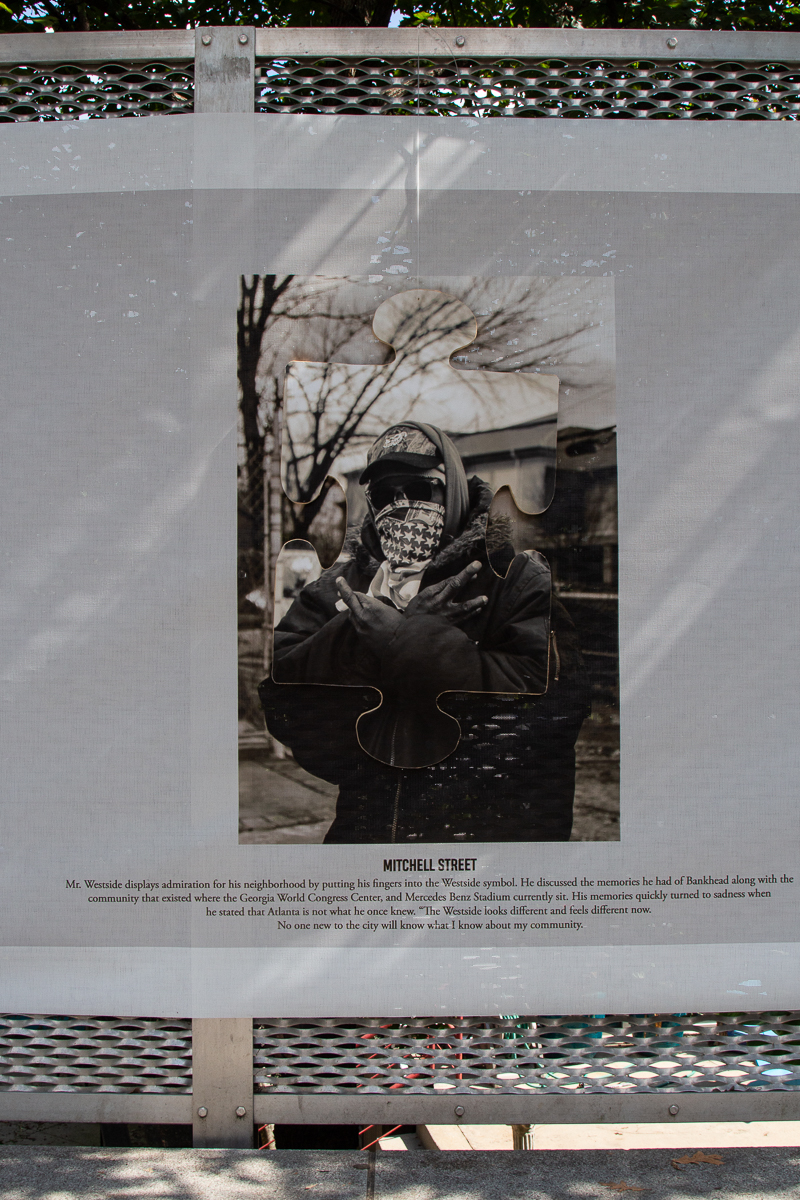 Atlanta, the Southern Hollywood, is highlighted for its trendy lifestyle and affluent culture in the arts and nightlife, but like any major city, there are parts that are often neglected and hardly mentioned. Vine City is a historic district in Atlanta–home of historically black universities, Clark, Spelman, and Morehouse. The city is where Dr. Martin Luther King Jr. led the most revolutionary movement in the world, but this town once rich in ancestral spirit is now a Ghetto. Drugs, homelessness, violence, and poverty are slowly killing the bodies and spirits of the black men, women and children that are forced to live there. The people are either too comfortable or struggling to leave. To make matters worse, millions of tax dollars went into the Mercedes Benz Stadium in their very neighborhood, but nothing is being done about the health and welfare of their impoverished community.

Photographic Artist, Rose Smith took her passion for photography and anger toward the gentrification and abandonment in Atlanta and captured Vine City in this inspiring series, Last Pieces of Vine City. She was inspired by childhood visits from North Georgia to the West End of Atlanta, where her cousins’ resided. The experiences sparked the quest to understand a part of the Black experience that she felt she was missing. The project was also influenced by Gordon Parks’ A Harlem Family.

The Zeal Life first covered the project in Sept. 2016 and updated it in Nov. 2017 after being displayed all around Atlanta. the series has taken off and is now showing at the Atlanta Beltline. Newly titled,  Last Pieces of Vine City, the series has evolved tremendously over the past two years:

“The experience of seeing my work evolve has been fascinating. It begins with concept each time; me asking myself what will the significance be behind taking a still image and printing it on found materials. I’m always thinking of ways to engage my audience; whether my audience is patronizers of a gallery space or the general public viewing my outdoor installation. I actually foresaw this happening last year and I was excited to see my vision manifest. It gives this work a whole new meaning outside of the walls of a gallery space.” 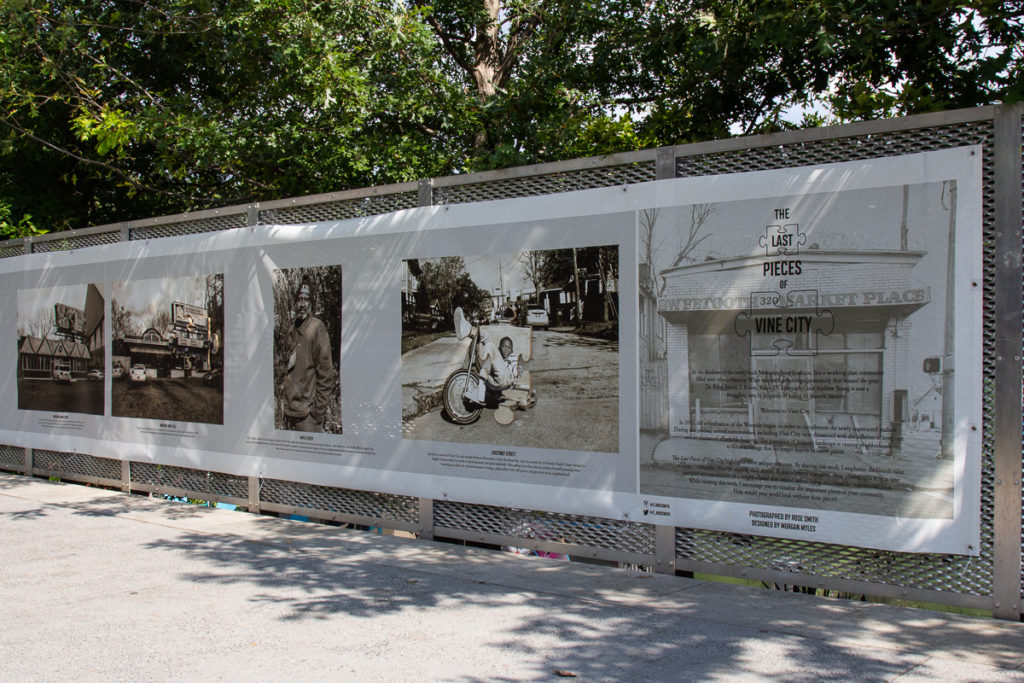 “My cousins were raised in the inner city of Atlanta, while we resided in a middle-class predominantly white neighborhood in North Georgia. I remember spending weekends with them, walking around their neighborhood hearing gunshots firing off in the air.” 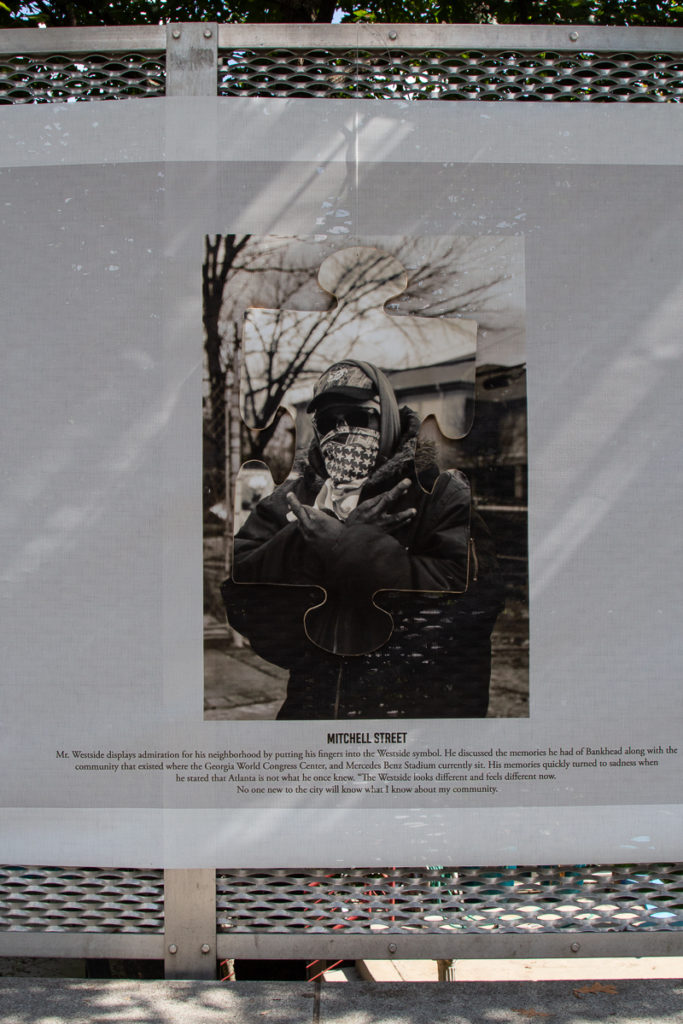 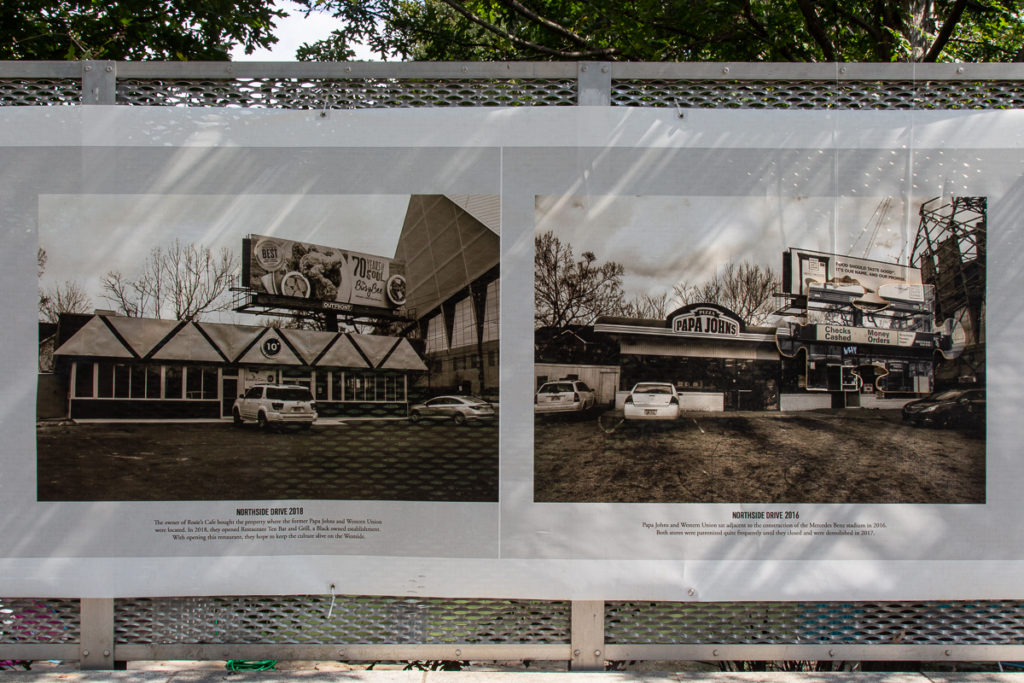 Last Pieces of Vine City sheds light on the qualities of a community that exudes the feeling of being half dead but still alive, exemplifying that there is still a great amount of hope and light seeping through the cracks of this dark conspicuous tunnel. It is an ongoing project alluding to the fact that not only do black lives matter here but more importantly, their history and stories matter. If gentrification takes place, it will wipe out the people who will then become the missing pieces erasing the history of Vine City.” 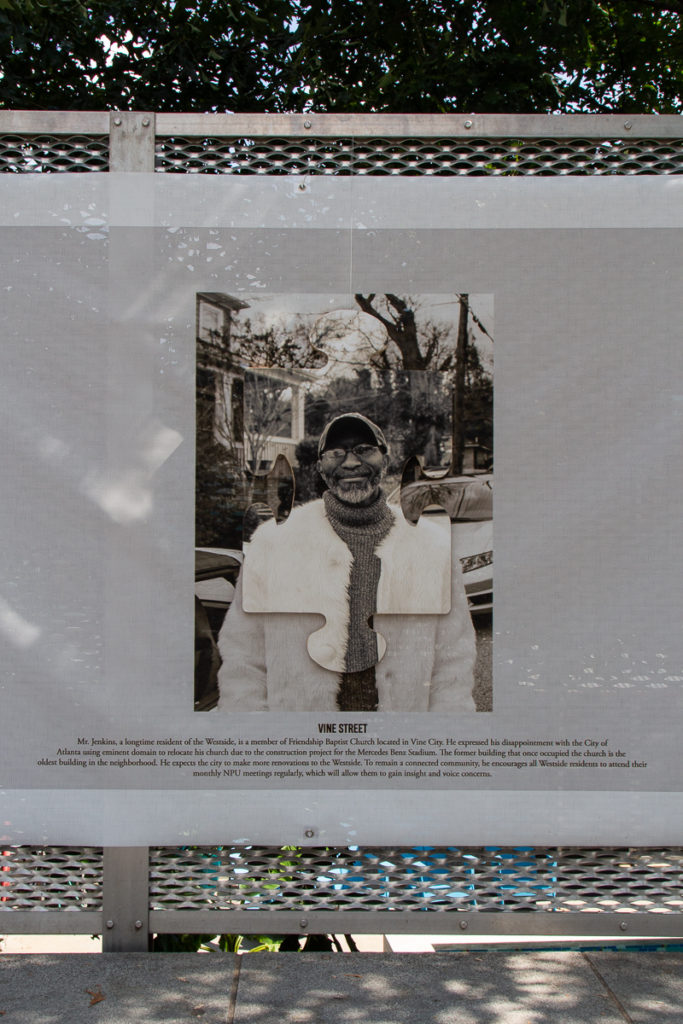 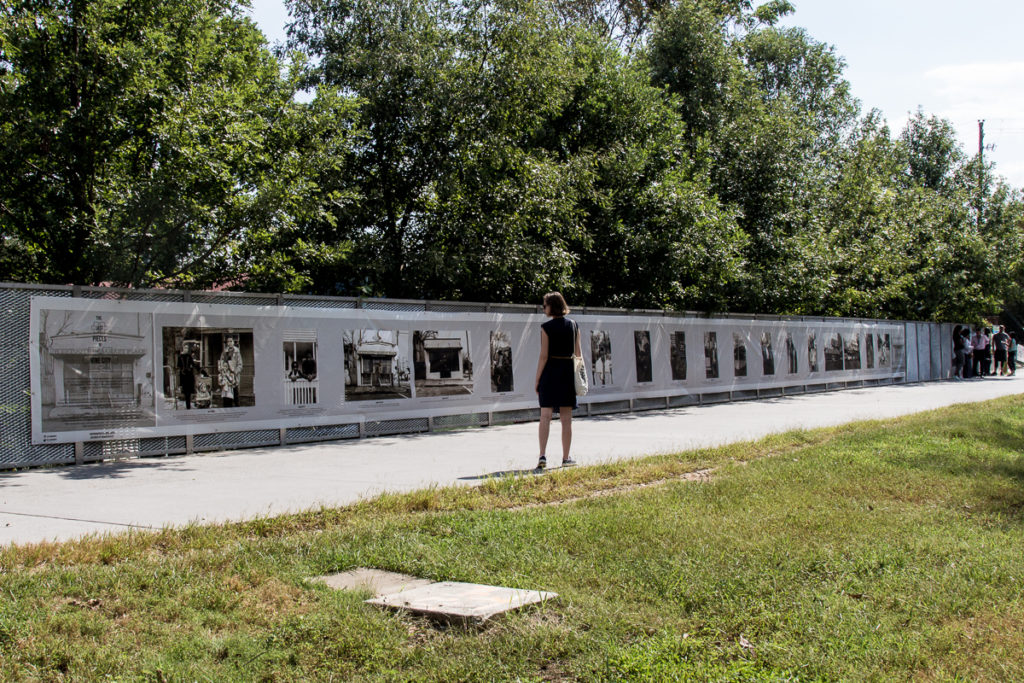 She believes the work found a home in the streets of Atlanta, where they originated, referring to the installations as environmental art. ” I think it’s perfect to have these photos in an actual environment to see how people respond,” she adds.

The locations give the photographs a renewed perspective, but they do not change the mission of the work. As a matter a fact the gallery and city installations are very similar in nature, for her collaborative senior exhibition, she printed 6 of the photographs on newsprint representing newspaper covers and wheat-pasted them onto wood panels, which are used to board abandoned homes. “I accomplished bringing the environment inside of a gallery space and creating a conversational piece.” 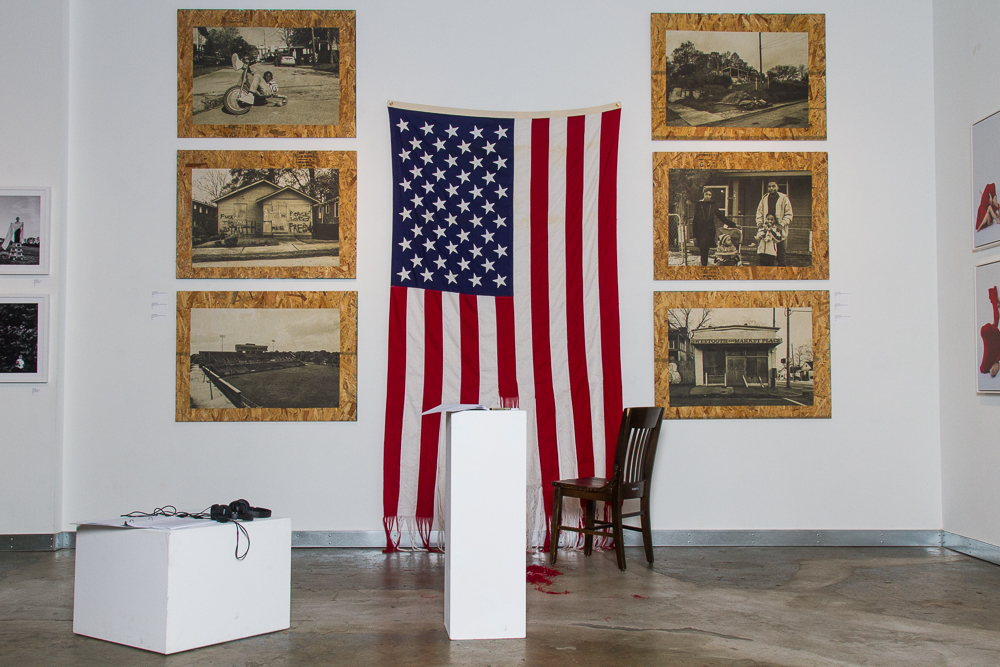 “I included the American Flag in its beginning stages of each stripe being unraveled to signify how my work is a social justice issue. Gentrification shows that we are still not equal and there is still a disconnect. Each strand of the flag hangs separately to represent that disconnect. We are more focused on individuality than on building community across America’s diverse culture.”

When asked where the future of the series is headed, Rose says, “I foresee my work expanding internationally, which will cause me to discuss through visual art how socioeconomics and environmentalism impact our health and well-being. These are topics with factors that are not highlighted frequently through art. My vision is to form the big picture with all of its details using photography as a catalyst.” She adds, “Although I’m a photographer, I live the spirit of the prolific leaders who came before me. I will keep change and evolution on my mind until the face, the words, and the actions of love transform and unites us all.”

It is projects such as this one that encourages change, and what better way to bring awareness to sedated subjects than through art and passion, and that is exactly what Rose has done in Last Pieces of Vine City. Each photo captures the spirit of this dying neighborhood, and because it is an ongoing project for Rose, we will continue to see these stories unravel.

Rose Smith is a writer and documentary photographer born in Memphis and based out of Atlanta, GA. She received her BFA at SCAD Atlanta in photography and has received the Atlanta Emerging Artist Award to continue this body of work. She also earned a grant for a public art installation – having 30 photographs from this series on display throughout the city until the end of 2017.  She spends most of her time studying the aftermath of the African Diaspora and the Black Culture through reading, watching documentaries and discovering and rediscovering Jazz and Blues musicians.  Through her extensive community involvement, she is invested in inspiring youth to discover their artistic abilities to impact their communities.

You can find Rose and more of her work on Instagram  @c.rosesmith and be sure to stay tuned for updates on this project here on The Zeal Life.

The Summer One Piece