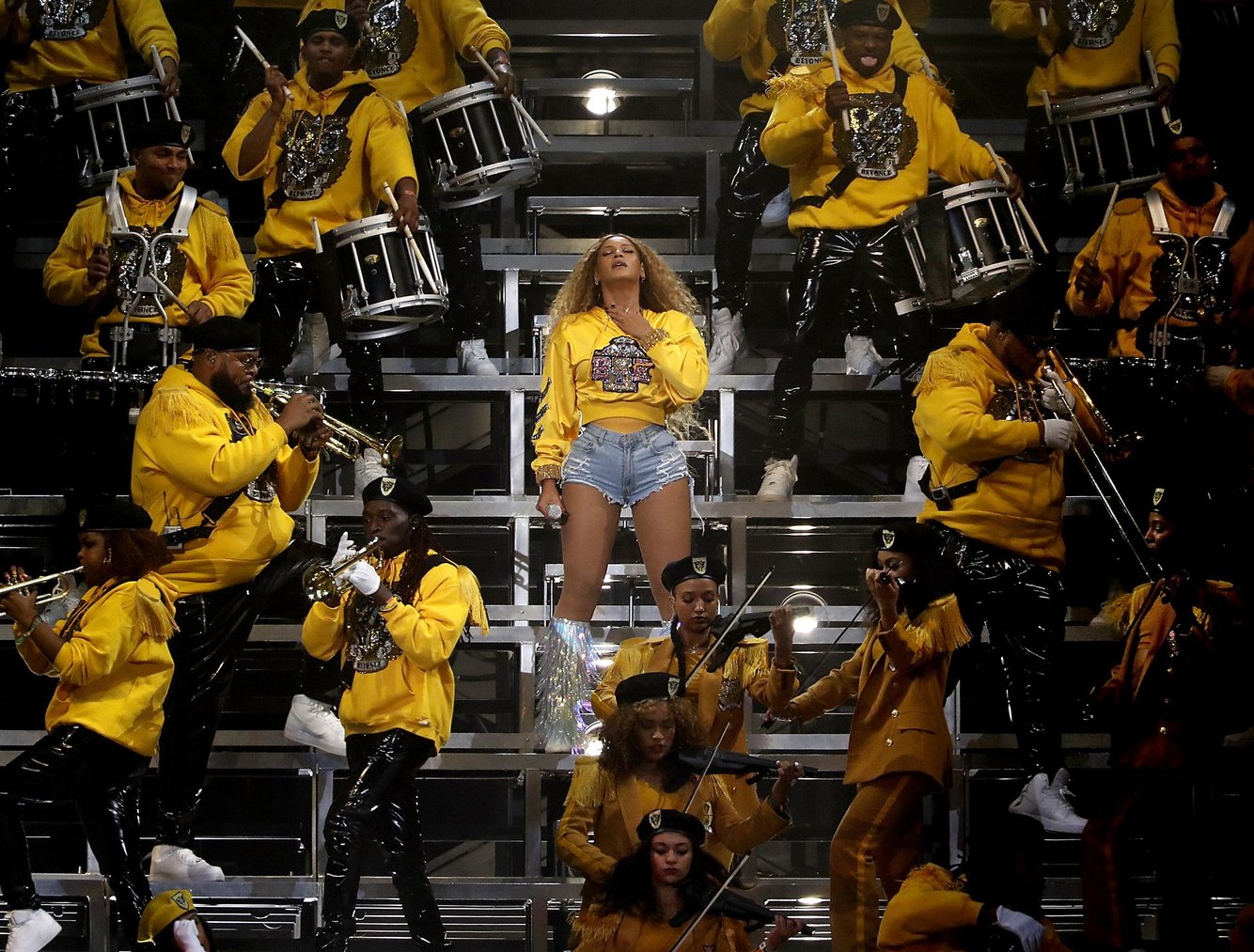 You may have seen hundreds of headlines of Beyoncé’s Coachella performance, and while I’m not the first to write on the topic, I have to touch on it.  I missed the opportunity to post about Black Panther and her performance falls in line with the Wakanda movement. Beyoncé was the first black woman to headline Coachella, and she showed up and out! Her performance broke and continues to break the Internet. There are 5 key points you cannot miss, that have black girls everywhere screaming YASS Bey!

The performance gave young black men and women an opportunity to shine. From the band, to the dancers, steppers and guitarists throughout the show–Beyoncé gave these artists a chance to be a part of history. That in itself is incredible. Giving opportunity for artists, where there may not be one.

2. A Celebration of Black Ritual

The band is a monumental way to celebrate black tradition. For Historically Black Colleges and Universities its not just the football team that brings community– its the band! The band and color guard hype the football games; they bring the spirit–even over the cheerleaders. This has been true since the 1960s. And Beyoncé of course did not miss a beat; sororities and fraternities are also a common tradition of HBCUs. They create sisterhood and brotherhood. And while there are other universities that also provide the opportunity to pledge– it’s the stepping and culture that separates black pledgers. From the yellow hoodies with Greek symbols, to the color guard twirlers, the performance was a massive celebration of our culture. Peppered in was Krump dancing, African traditional dances and The Black National Anthem. She hit it all.

We are a strong breed and carry confidence both threatening and intriguing to the world.

3. Black Women Are Too Often The Underdogs

“The most disrespected person in America is the black woman. The most unprotected person in America is the black woman. The most neglected person in America is the black woman.” Beyoncé inserted this Malcolm X quote in her video Lemonade in 2016, and we got a reminder in her Coachella performance. There is an extensive history of trauma of black women in America. Statistically we’ve been considered the least attractive, least likely to get married, we are often painted in media as being angry, ghetto, bitter.  The black woman endures a lot. With something as simple as going to work, we can encounter micro-aggressions of racism and inequality. We are a strong breed and carry confidence both threatening and intriguing to the world.  There were segments in the performance that were especially for black women. Beyoncé was a mother figure reminding us to be confident, bold and beautiful.  Despite what the day to day looks and feels like whether in our relationships or at work– we must remind ourselves of who we are and where we came from.

4. Friendly Reminder, Black Culture is The Most Influential

Culture Appropriation is rampant in mainstream media– In fashion, in music and art. Every second there will be an artist or celebrity that takes from black culture and claims it as his or her own. Hairstyles, style of dress, language, music, dance and even physicality are often taken without credit. Beyoncé at Coachella is a reminder of the originators of it all. And yes its okay to share and celebrate the beauty of our culture, but do so with knowledge, respect and appreciation of the culture. We cannot be worn and taken off. What others may see as trend is culture and identity for us.

Beyoncé took it all the way back! From Check up On it, Get Me Bodied, Deja Vu, Crazy In Love she even brought out Kelly and Michelle to perform classics like Soldier and Say My Name. The nostalgia was beautiful. Anybody who grew up listening to Beyoncé, I mean from Destiny’s Child Bugaboo to Crazy in Love, to the B-Day Album, understands the emotion behind seeing her perform those records. While Beyoncé has been a household name for decades, lets be honest, its us little black girls who grew up on her music. Me, Myself and I, Signs, Ring The Alarm, Green Light, Upgrade You. All childhood classics.