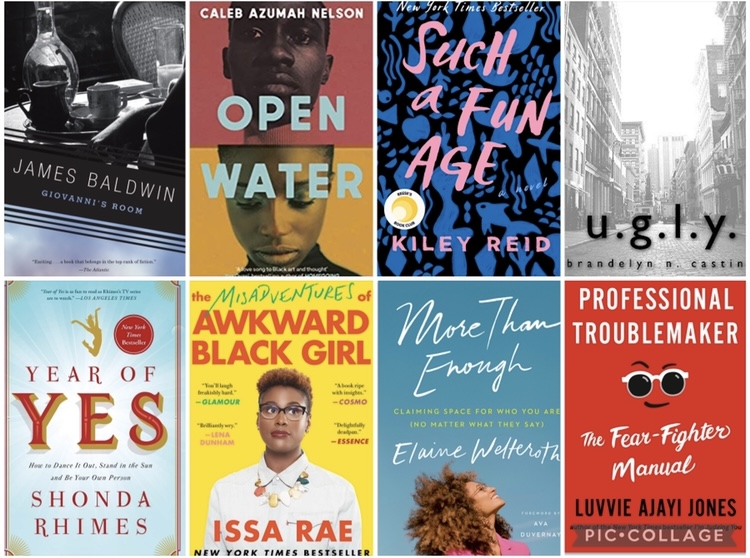 When it comes to the amplification of Black voices an often overlooked discussion is that of Black Authors. Whether it be fictional tales of love and romance, twisted mysteries and thrillers, or poignant tellings of historical truth Black storytellers are an important part of Black culture as they showcase the Black experience from our perspective. So we have compiled a list of 15 books by Black authors from all different genres that you should get your hand on this summer.

Contents
1. Year of Yes2. Such a Fun AGe: Kiley Reid3. More than a Enough4. Professional Troublemaker5. The Hill We Climb6. Between the world and Me7. Misadventures of an Awkward Black Girl8. Stop living on auto-pilot 9. Becoming10. The Fire next time11. Giovanni’s Room12. all about love13. Bad feminist14. open water15. u.g.l.y

Creator of Grey’s Anatomy, Scandal, How to Get Away with Murder, and the executive producer of Bridgerton Shonda Rhimes is the definition of a successful multihyphenate. In her book, Rhimes lets us in on her guide to facing your fears and finding your truth. In her book, Year of Yes, the talented writer tells how one full year of saying yes to the things that scared her most changed her life. This book might be just what you need if you’re looking to level up your life.

In her debut novel Reid tells the story of Alix Chamberlain, successful blogger and business owner and Emira tucker who is a college graduate working for Chamberlain as a babysitter to her three year old daughter, Briar. One night when Emira gets racially profiled and accused of kidnapping while she is watching Briar, the relationship between Alix and Emira begins to change, as the incident causes a ripple effect that brings shady things from the past to light. If you want a book with an ending that will leave your jaw on the floor, look no further, this is it!

3. More than a Enough

From Former Editor in Chief of Teen Vogue to Bestselling Author to now being a TV Host of CBS’s The Talk, Elaine Welteroth knows a little something about what it takes to achieve your goals and claim your space. In a fun and honest memoir Elaine discusses race, love, identity and what it means to own your space as a Black woman. In the pages of her book she reminds us all that we are indisputably and undeniably More Than Enough.

The Fear Fighter Manual- In a hilariously written novel Luvvie Ajayi Jones gives us a guide to what we can be, say, and do to fight fear. Her amazing dialogue makes us feel like we’re getting advice from an older sister that only wants the best for you. She doesn’t sugarcoat and she doesnt play games because neither does fear. Jones’s book is real, raw and funny. It’s a must read.

5. The Hill We Climb

No one can forget the amazing poem given by Amanda Gorman at the 2021 Presidential Inauguration. Gorman left viewers awestruck as she urged us to look toward a hopeful  future for our nation, for the world. The hill we climb is a timeless read and we’re sure it is one that you’ll reach for time and time again.

6. Between the world and Me

Written by Ta-Nehisi Coates as a letter to his teenage son, Between the world and Me details the realities of race in America. Through his brilliant prose Coates speaks truth to the lesson of fear, life, love, and search for identity that are all too real to the Black experience. A required reading.

7. Misadventures of an Awkward Black Girl

Now we all know Issa Rae the queen of comedy and owner of Sunday nights with her show Insecure. In her book Misadventures of an Awkward Black Girl, named after her youtube series, Issa regales us with stories of her past and with the lessons they have taught her. A can’t miss book that will make you laugh till you cry, in true Issa fashion.

Public Speaker, success coach, and journalist Antonio Neves lets us in on how he took responsibility for his life and turned it around. Through exercises and stories, Neves pushes readers to do the same.

Becoming, the memoir of former First Lady Michelle Obama takes us through the story of her life from her growing up in Chicago through the love of and marriage to former President Barack Obama and through to her life as a mother and all of her many other accomplishments. A truly inspiring read from a truly inspiring woman.

Written in the 1960s during a time of segregation the nonfiction book by James Baldwin is composed of two passionately written essays on racism and the black experience in America.

Another must-read by James Baldwin, he tells the story of David, an American man living in Paris grappling with his sexuality as he begins a relationship with Italian Bartender Giovanni. An enticing read that tackles the concept of identity through gender and sexuality. A novel truly ahead of its time.

If you have ever wondered why some relationships just didn’t work, why it seemed like sometimes you and your partner spoke different languages… you need to get your hands on All About Love by Bell Hooks. She discusses the way that love is viewed in today’s society and how the true meaning of love is lost upon us as a people. She defines love not just as something that we feel but something must actively work to do. Hooks adds a nuance to the concept of love that is often arbitrarily thrown around giving it meaning in a time when she feels that it has been abandoned.

In the New York Times Bestseller Roxanne Gay tackles the heavy and complex topic of feminism with lighthearted humor as she takes readers through the realities of evolving as a woman a journey that is sometimes flawed but very very real.

In Open Water, we are told a story of two young Black artists who meet in a bar and end up falling in love. Throughout the book we see their love story unfold as they try to navigate their relationship in a world that seems to be against them.

Another love story that makes for the perfect poolside read tells the story of two college students Blair and Salim. As Blair grapples with her body image she begins an unexpected relationship with Salim. As the story switches between the perspective of the two main characters we see what led to the start of their relationship and its eventual demise.

Are Pajamas the New High Fashion?

Did our Favorite Childhood Shows Predict Our Future Career?